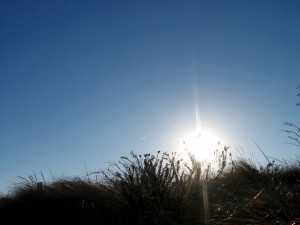 I have never been able to resist a night crawler coaxed out of its tunnels by a summer gully washer. I cannot turn a deaf ear to the moans and screams of brother worm exposed and writhing on a sidewalk turned worm-griddle. Whether in business, or casual attire, I compulsively halt, scoop up the once hopeless annelid, and restore his/her slimy hermaphroditic flesh to the cool bosom of gentle Mother Earth.

I suppose it was this same impulse a couple of decades ago that caused me to wonder why no one had seen my younger brother Bob for more than an hour. Each year, since high school, some friends and I would launch a hundred mile bike ride through the heart of Central Illinois during the hottest part of the summer.

Through some mathematical alchemy, meteorologists regularly calculate and adjust temperatures to account for wind chills and heat indices. I have never heard of any of them mention an “asphalt index.” Nonetheless, ninety-eight humid degrees when served up on sticky, asphalt country roads has to be good for an additional dozen degrees or so. It was on just such a day when I began to wonder where my works-at-a-desk-so-too-busy-to-train-for-a-bike-ride brother was.

After a few inquiries, my wonder turned to worry. One U-turn, and several anxious miles later, the mirage-like image of a rudderless bicycle emerged. The visible waves of heat dancing off of the pavement, and the way my brother was careening back and forth across the country road, made him look like a hawk riding circular, lazy updrafts of heated air. Bob greeted me with the incomprehensible speech of a man whose neural pathways had been slow cooked to the texture of beef jerky.

There was just enough comprehension and motor skill left in him to follow me to a local farmer’s deep, cold well. As water poured down his parched throat, and soaked his head and clothes, consciousness began flowing through the rivers and tributaries of his previously dried up brain synapses. Bob was able to finish the ride that day. Another one of God’s creatures had been restored.

Rescuing God’s creatures from dehydration (whether from the top or the bottom of the food chain) could fit under the chapter title stolen from a 1990’s bumper sticker, “Random Acts of Kindness.” By way of contrast, my friends, Angie and Jenny seem to live their lives by a different, custom-made bumper sticker. They tend to practice “Intentional, Deliberate Acts of Ongoing Kindness and Self-Sacrifice.”

Some years ago, Angie and Jenny purchased a broken-down old house in a broken-down old section of North Saint Louis. After restoring it, their intention was to provide hospitality and two adoptive aunts to help an over-burdened mom, Amy, raise her seven children. After two years of back, and wallet-breaking work, everything was ready. That plan fell through due to Amy’s inability to break free from an abusive relationship. Angie and Jenny’s sense of mission did not.

Before long, another interested homeless family was located. For five years, I watched Angie and Jenny invest the determination, frustration, hope, and dreams that come with loving four children and a burdened mother. Slowly, slowly they came to see the fruit of their labors…adoptive nieces and nephews succeeding in school (thanks to Jenny’s full time tutoring), and a solid structure of family life with clear limits and boundaries having their effect. They also had to learn to train a good deal of self-nurturing neighborliness back toward themselves. Realistically, loving with one’s whole heart, mind, soul, and strength can take its toll.

This Sunday’s first and third readings (Deuteronomy 30: 10-14; Luke 10: 25-37) taken together, provided a thumbnail sketch of what human beings look like when they are true to their nature. The author of Deuteronomy described something like a natural law that has been etched into the human heart, which is made in the image and likeness of God. Luke’s Gospel provided the audiovisual of what a person does who follows the promptings of a heart made from love, for the purpose of loving….They frequently find themselves practicing both random, and deliberate acts of neighborliness all the time.

A truly developed Christian anthropology holds that if you could perform a spiritual paternity test, every human being’s spiritual DNA would reveal divinity pulsing at the core of each cell. We affirm that God is love. To be true to who we most essentially are, we must be loving someone. Anything short of that will make us feel out of sorts.

The random acts of kindness and neighborliness I described myself performing in the earlier part of this essay are a start—kind of like training. As one matures in this business of listening to the pulse of God’s life within, he or she becomes more like my friends Angie and Jenny. Random acts of neighborliness still occur, but little-by-little, more and more, the scope of who the neighbor is expands. And the acts themselves become more deliberate and intentional. After awhile, even the self must be seen as a neighbor worthy of deliberate acts of kindness and love.

In this moment in history, it is as if so many of us are caught on hot pavement, squirming in the heat of inflamed passions. The arc of this week’s readings intersecting with the arc of this week’s national events, suggest an intentional, deliberate way to navigate our way through the heat of this summer. We must steadfastly resist the urge to shrink the boundaries of whom we include within the circle of, “our neighbor.” The saint from whom our current pope took his name, once asked for the grace to be an instrument of peace which, he believed, had everything to do with “seeking to understand more than being understood.”

Whether you are in training, or have already started performing “Intentional, Deliberate Acts of Ongoing Kindness and Self-Sacrifice,” this week’s readings challenge you and me to see that the well-ordered soul is always busy loving. And the boundary of that love continues expanding to include more and more neighbors…even during the heat of a particularly brutal summer.