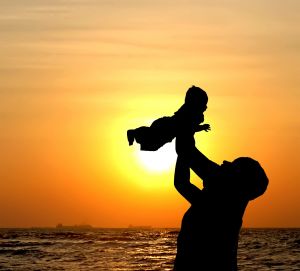 Six years ago, the twelve-year-old version of my college-aged daughter single-handedly, and unintentionally placed the whole world into a state of suspended animation.  This miracle of physics was created, neither through a Harry Potter-like incantation, nor through an Albert Einstein-like quantum equation.  No.  Annalise caused a momentary pause in the time-space continuum by simply uttering a completely innocent, yet, atom splitting kind of question.

The moment those words left her mouth, traffic immediately halted.  Songbirds fell silent in mid-chirp.  A stream of coffee that was just being poured at the local diner hung like an ice-cycle over an outstretched, empty cup.  In the back seat of our vehicle, my children waited for an answer…an answer that I knew had the power to reshape their concept of “dad”…an answer that could potentially help form their concept of appropriate adolescent behavior.

In the twinkling of an eye, I consulted my inner-mental blackboard, trying on and discarding a variety of less-than honest answers.  I momentarily weighed the “Clinton Approach”: “It depends upon your definition of  ‘trying marijuana.’” I briefly considered the typical “Counselor Side-Step”:  “What is it in you that makes you want to ask this question?”  I even thought about pointing out the window and yelling, “Look, a bald eagle in the middle of the city!”

In the end, I went with the moral-minimalist approach which involved providing an honest, but not necessarily open answer.  Every teen and pre-teen comes equipped with a profoundly sensitive BS detector. After my less than forthcoming answer, Annalise shoved the microphone more fully under my nose with a flurry of follow-up questions.  “You did!  How many times?”  I stuck with my minimalist approach and feigned nonchalance.  I then proceeded with a necessary, but decidedly generic, and professorial speech about drugs and kids.

In this Sunday’s Gospel (Matthew 18:15-20), Jesus provided a step-by-step teaching on how to deal with a brother or sister who has taken a wrong turn off of the path.   As a counselor, and a man with a past, I knew how various gravel roads and alleyways would eventually be presented to my daughter as viable pathways to happiness.  I knew, because I followed one or two of them far enough to glimpse their dead ends.  I also knew, six years ago, that the day would come when Annalise lived far away from the protective gaze of her dad’s supervision.

In the days that followed my conversation with Annalise, a gnawing feeling inside was telling me that my less than forthcoming narrative had meandered away from a pathway I had marked out for my relationship with her.  Up until that conversation, honesty, and developmentally sensitive openness had characterized my relationship with Annalise.  I determined to find an appropriate way to tell her the truth.

In this week’s Gospel, Jesus made references to the authority that comes from subjecting a discernment to one’s faith community.  Before booking a talk with my daughter, I spoke with a couple of friends whose spiritual and psychological maturity I trusted.  I bounced my talk off of them in an effort to make sure that my comments wouldn’t give Annalise some unintended permissions.

Knowing a child’s discomfort with heavy, deep, and real talks, I invited her on an impromptu bike ride.  Side-by-side, our bicycles followed the contours of an empty country road while our conversation wound through my personal story. Through the medium of my life, Annalise and I were able to discuss important topics like peer pressure, bullying, the effects of isolation, our family’s genetic predisposition to addictions, and Christ’s ongoing power to set our feet back on higher ground.

The most effective interventions do not come from a “one up” position, but rather, from someone who is willing to own up to his or her status as a fellow wayfarer along the journey—someone who is willing to share from their common humanity.  Real authority in any given relationship is earned from regular investments of trust and respect, and the willingness to show up with warmth and vulnerability.

I am a firm believer in self-fulfilling prophesies.  If I look toward the ups and downs of adolescence with dread, I believe that I will send 10,000 unconscious negative messages to my children about this developmental stage.  I will create what I fear.  Therefore, six years ago, I steadfastly chose to look forward to adolescence with joyful anticipation.

Having said that, should Annalise (or any of my children) stumble, or one day take a wrong turn, I believe that I will be glad for the investments of trust and honesty I set aside for her when she was twelve years old.

One Reply to “Did You Inhale?”