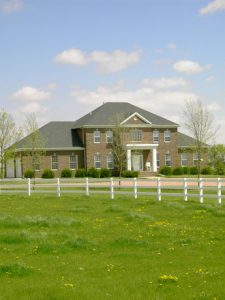 Several years ago, my brother-in-law, Daniel, showed excellent judgment.  When confronted with a seriously receding hairline, rather than succumbing to the inborn male instinct to do a “comb over,” he simply followed the road signs in the direction that Mother Nature seemed to be pointing.  He shaved his head Michael Jordan/Yul Brynner-bald.  And so now, rather than looking Ted Koppel-silly, he looks Michael Stipe-edgy.

When it came to lawn maintenance, my dad displayed a strategy similar to Daniel’s. Like my new brother-in-law, dad was well aware of the limits that creatureliness had imposed upon him.  Dad was the father of seven kids and two small businesses.  He had neither the time nor the inclination to purchase those products that were the horticultural equivalents of Rogaine to be massaged into the root system of a lawn.  He thought of weeding and watering as a job for chumps with nothing better to do.

Dad was from the minimalist school of landscaping.  He believed that a short lawn hid a multitude of sins.  And so, when he knew that company was coming over, dad just gave our crab-grass a buzz cut.  From a distance, our lawn looked great…for a day or two.

Like my father before me, I now subscribe to the minimalist school of lawn-care.   If a botanist recorded the names of the various herbal intruders in my backyard, it would read like the side of a farmer’s barrel of Treflan herbicide.  And so, like dad, (or Daniel) I hide what Mother Nature is doing in my yard by keeping things clean-shaven…especially when we’re having company.

But it wasn’t always this way.  While living in our newlywed home, my brand new wife off-handedly commented that our backyard wasn’t “peaceful.”  To a new husband who had waited thirty-four years to find the right woman, Lisa’s words struck me as a kind of mission statement.  Immediately, my new avocation became crystal clear:  to create a green, Turkish towel-like turf to caress my new wife’s precious bare feet.

Trouble was that the hearty mixture of creeping crab grass in our yard amounted to a comb-over of the worst sort.  Two decades earlier, a previous owner of our house had constructed a network of rock gardens that extended the length of our backyard concluding with a concrete patio.  Over the years, the patio sunk, and the rocks settled below several inches of the toughest, meanest crabgrass known to man.

My work began with the construction of a large wood frame over which I stretched and nailed a wire mesh.  With this homemade sieve, I sifted the whole backyard one-shovelful of dirt at a time.  Tons of gravel accumulated in a huge pile for later removal, while tons of loose, rock-free topsoil was reclaimed.  With a sledgehammer, and wire-cutters, the submerged concrete patio was taken to the curb, one puzzle piece at a time.   Two months of seeding and watering transformed our backyard into a miniature fairway worthy of Tiger Woods.  All that skimming, sifting, pounding, grading, lifting, planting, and tending, resulted in a peaceful newlywed yard.

In this Sunday’s Gospel (Matthew 13: 1-23), Jesus spoke of seeds that fell on a hardened pathway, on rocky ground, in a thorny thicket, and finally, in good soil.  Some seed was eaten, some was scorched, some was choked, and some produced thirty, sixty, and even a hundred fold.  As I read this parable, it struck me that Jesus’ story was all about relationship development.

The difference between the lawn of our newly married days, and the uneven, crabgrass in our backyard twenty years later is simply this:  labor.  Flush with the emotion of a newly married man, summoning the energy to transform the equivalent of a vacant lot into a miniature golf course was relatively easy.  Years later, the husband of twenty-three years, who knows that his wife would still love a peaceful backyard, now subscribes to the minimalist school of landscaping.

Fresh off of a retreat weekend, it seems like the most natural thing in the world is to focus on one’s spirituality.  What separates infatuation from mature love is what happens in the next several weeks, months, and years when the devil of the noonday sun makes taking a break from spiritual practices seem natural and intelligent.  Practicing the presence of God when the infatuation wears off is the key to the development of a deep spiritual root system.

Practicing acts of love and responsiveness, even when the feelings have waned is the key to growing more love. A successful gardener weeds and waters even when he or she doesn’t feel like it.  A good mother feeds her baby even when she’s tired.  Likewise, a mature relationship gets rejuvenated when one or the other spouse abandons a minimalist approach to marital landscaping.  The only way to grow more love is to do more loving.  Doing love eventually grows love.

Is there a landscaping project somewhere in your life that awaits your decisive action?