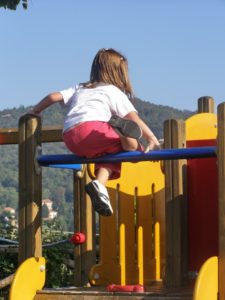 Many graduations ago, on the evening of my son’s first grade end-of-the-year party, my workday and my wife’s work night schedules required that we attend the party in shifts.   When I arrived about an hour and a half into the soirée, Lisa told me about a little boy scuffle between my son and one of his best friends, Jason. Time wouldn’t allow her to fill in all of the details.  I would have to investigate on my own.

Having been a little boy myself, I knew that there were at least two sides to this story.  After hearing my son, John Harry’s point of view, I located a mom who was present for “The Kick Heard Around the Playground” incident.  She described how one of my son’s best friends, Jason, grew frustrated as he started to lose a game of “Four Square.” Jason is a frequent houseguest. Storming out of a game that he has determined is unwinnable is an ongoing bad habit for him.  My son loves sports.  He loves to win at sports.  If you want to hit him where it hurts, quit a game when he starts beating you.  In John Harry’s book, this was the first, but by no means the worst, low blow of the scuffle.

My reporter/mother went on to describe the next link in the chain of this conflict.  “When Jason went off by himself to pout, John Harry followed him and said, ‘Good, I’m glad you quit!’ in a voice that amounted to the same thing as singing, ‘Na, na, na, na, na!”  Apparently that comment also hit Jason where it hurt.  He got up from his self-imposed exile, and walked toward my son gunslinger style.  One shove led to another.  This was a game Jason didn’t intend to lose.  He chose the nuclear option.  He let fly a soccer kick that would cause any father from a several mile radius to stop, cross his legs, and wince.

All of us, at one time or another, have sat in a quiet church and heard a toddler fall headfirst against the resonating wooden pew.  The six seconds of silence that follow are similar to the lapse in time between the bright flash of lightning and the subsequent clap of thunder.  After all the missing air returns to his lungs, the little person sings out his pain from the diaphragm like Pavarotti straining to hit a high note.  When the bellows of my son’s lungs were refilled, he apparently let go with a “Hounds of the Baskerville’s” howl that caused baseballs, Frisbees and kick balls to fall silent in the dirt… that caused all the babies in our township to pause momentarily from nursing at their mother’s breasts…that caused otherwise unreflective men to stand as still as monks during the Angelusto ponder the true underlying fragility that is the masculine condition.

Thanks to his first grade anatomy, John Harry made a full recovery within twenty minutes.  Jason’s parents delivered a firm and immediate consequence.  The party had returned to normal by the time I had arrived. But an interesting phenomenon followed. First one mother, and then a father, dangled subtle and not-so-subtle invitations to critique the development of Jason’s character, and by implication, that of his parents.

In this Sunday’s first reading (Acts 2: 1-11), the disciples became aware of new power moving in the world.  The Holy Spirit was manifested most convincingly in the speechof the disciples.  The crowd gathered was amazed at what they were hearing issuing from the mouths of ordinary men.  This Pentecost, I invite you to consider the tremendous power of speech to manifest the authority of the Holy Spirit and build up others, or conversely the power of speech to manifest the lower angels of our nature to tear down others.

I know Jason.  He is a sweet little boy who made a bad mistake (encouraged by my son’s snotty behavior).  Yet something within me wanted to follow the dark conversational pathway of critiquing Jason and his family.  Constant tugging from my two year old with her desire to hit the playground saved me from this near occasion of sin.

There is a tendency hardwired into our fallen natures to enjoy a little bonding at the expense of someone else.  There is a kind of pseudo-intimacy in identifying bad behavior in somebody “over there,” because after all, we are together “over here” at our much higher plain of existence.  The more “educated” or “religious” we are, the more skilled we can become at couching this destructive entertainment in words of “concern.” .

This Pentecost, consider the kind of speech that you are bringing into the world either by what you say, or what you listen to.  What kinds of words pass from your mouth into the world?  Do your words shine a light on the best in others, or do they direct your listener’s attention toward flaws and defects?  What speech are you regularly listening to?  Are you allowing yourself to revel in someone else’s words that vilify people with a different point of view than your own?  Do you regularly listen to radio or television shows that vilify “conservatives,” or “liberals” with sweeping generalizations, labels, and insults?

This Pentecost, would you be willing to take some time to consider whether or not the words you are speaking, or the words that are feeding you, are providing a playground for the Holy Spirit to change this world into a place where cooperation, community, and love are made manifest?