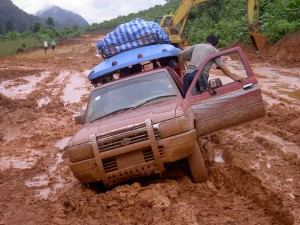 My dad grew up about fifteen miles north of Springfield, in a little coal mining community of Athens, Illinois (Not pronounced like the capital of Greece, but with the creative downstate long “A” sound also found in the pronunciation of Cairo, Illinois.).  Being the son of a man who moon-lighted as a weekend hunting guide must have convinced my dad that an infallible sense of direction was his birthright.

Now, Athens is nestled alongside a river valley.  When it rains, the valley channels the water into the muddy, meandering Sangamon River.  In the process, the loam that makes up that river valley quickly saturates.

All week long, early Spring/late Winter rains were waking up the root systems of the dense stands of Osage Orange, Oak, and Sycamore trees that tangled together near the banks of that serpentine river.  The Sunday after all this rain, we decided to visit my grandma who resided in a skilled nursing facility just outside of Athens.  When the visit concluded, we were running a little late for my afternoon basketball game forty miles away.  My dad, who had thoroughly hunted and fished the hills and hollers of this land as a boy, was sure he knew a way to shave off a couple of tedious miles from our car trip.  Back in the day when my dad had mapped this terrain for himself, he failed to note that large sections of the river valley road he had selected were unpaved.  In his boyhood days, when he would have navigated it by foot or bike, the absence of a little thing like pavement would not have seemed relevant enough to make so much as a mental note.

When our several ton station wagon came to the place of its soggy repose, dad’s solution to the worsening dilemma was to press harder on the gas.  The feeling that our car was rocking, seemed to confirm his decision to continue applying the accelerator with more vigor.  The tread on the tires designed to avoid such circumstances, were now serving the function of little shovels burying the vehicle more and more deeply.  Eventually when the car was fully resting on its axles, nestled in the oozing mud, my dad decided that it was time to apply a new solution.  We walked a muddy, cold, country mile in our church clothes to a distant farm-house.  Dad called for an expensive fifteen-miles-away tow truck.

In this Sunday’s Gospel, (Luke 5: 1-11), Peter, James and John, had just spent the night spinning their wheels.  Despite all of their collective skills as fisherman, a night of back-breaking labor had yielded nothing.

The thought of these sea-faring men accepting the command of a carpenter’s son turned itinerant preacher is astounding when one considers the traditional methods of fishing around this time.  Prior to the advent of synthetic materials, heavy hemp nets, inches in diameter, would have grown even heavier with the saturation of a long night’s work.  Getting those nets into the water and stretching them would have required a backbreaking “heave ho!” and the strained rowing of several strong men.  Their willingness to listen to Jesus, and try something new resulted in an expedition that yielded much more than fish.

In my practice as a counselor, I regularly encounter husbands, wives, moms, dads, sons, daughters, employees, and students, who in one respect or another, are caught, like my family’s station wagon, in some kind of muddy situation.  Like Peter, James, and John, in this Sunday’s Gospel, despite their best efforts, they keep coming up empty.  Often, I find that people in situations like these, will behave like my dad when he was stuck in the mud.  They will simply apply the same old solution with more and more vigor.  Before long, the attempted solution becomes the problem.

Several years ago, my wife and I were spinning our wheels over a reoccurring marital conflict.  As we came to acknowledge that we were never getting anywhere new, I contacted a colleague, who agreed to conduct several sessions of marital counseling for us.  Like Jesus in this week’s Gospel, our counselor invited us to consider lowering our nets in a little bit of a different way.  It took some work, but through this process, we were able to set aside our tendency to press down on the accelerator of our usual unproductive solutions.  We gained some traction, and got ourselves unstuck.

Is there an area in your life where you keep applying the same solutions, but continually come up empty?  Is there a way in which you are spinning your wheels?  Would you be willing to consider locating a guide who could help you pull your boat out to deeper, more productive waters?