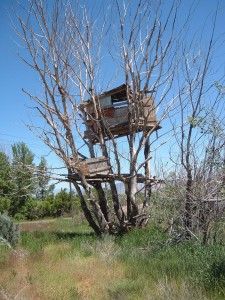 A couple of Sundays ago, just before sunrise, I tucked a thermos full of coffee and two mugs into a backpack.  Hoisting bag chairs over my shoulder, Lisa and I ascended the homemade wooden ladder into the heart of a sturdy old walnut tree.  Chairs were opened.  Coffee was poured.   Lisa and I toasted the handiwork of my friends, John, and Dave, the architects, engineers, and craftsmen who built our daughter’s (did I just say “daughter’s?”) brand new tree house.  Twenty feet in the air, we found ourselves in a squirrel thoroughfare.  Within five feet of us, I heard claws crunching on the thick bark.   A rust colored squirrel regarded us with a sideways glance on her way to a game of lightning-fast tag.  High above, two gray squirrels acrobatically chased one another, leaping between the outstretched fingertip branches of our host tree.  I expected to hear a prolonged “Boinggggg” as the slender branch bent down and then sprang back up as its quick-silver passengers were off to their next arboreal stepping stones.  The sunrise sermon those squirrels were delivering to Lisa and me was the same message I have received each and every time I have contemplated these amazing little creatures.  “Play is an essential part of a holy life.”

On the Saturday before our sunrise coffee klatch, my son and I greeted Dave and John as they arrived separately in their tricked out pick up trucks.  As we unloaded ladders, belts, and power tools, John Harry and I immediately noticed that these two men, who seemed like old friends, had just met each other.  Their easy-going, back-and-forth banter had the feel of two boys on their way to a gym or ball diamond.  As the first beams were hoisted, measured, leveled, squared and bolted into place, it became clear that John and Dave were not so much men at work as skilled boys at play.  At twenty feet up, I was doing good to hold simultaneously onto my ladder and bladder.  At twenty feet in the air, John and Dave were swinging hammers and saws right handed, left handed, and I’ll bet if asked, they could drive a nail behind their backs, while spinning a plate on a dowel rod.

Just like the squirrels I observed on the following Sunday morning, John and Dave were having fun exercising their well honed talents.  With all of those skills in and under their belts, helping a friend out with a project was actually play for them.  I have noticed the same kind of thing watching my son turn a double play, or beat a catcher and third baseman on a rundown.  Years and years of disciplined skill-building have resulted in the ability to translate all of that into play.

As a counselor, I notice how frequently I encounter adults undisciplined in the arts of play.  Having forgotten how to play, many of us have replaced childlike antics, skills and hobbies with poor substitutes.  So often, the word, “partying” has little to do with something that results in long-lasting happiness.  In absence of real soul-satisfying play that feels good at the beginning, middle, end, and even the next day, they turn to the same old activity that time and again fails to satisfy in the long-run.

In this Sunday’s second reading, the author of Hebrews discussed the role of discipline in the spiritual life.   That ancient author recommended that we “not disdain the discipline of the Lord” (Hebrews 12: 5).  Last night, Dr. Tom (i.e. the fella that gives advice about family life to people) had his nine-year old daughter, Lizzie, give him a dose of discipline.  She inadvertently conducted an impromptu skills assessment in the area of play.  She said, “It’s really fun hanging out with you dad.  Usually you’re too busy with chores to play with me.”  Every graduate level class I ever took…every book I have ever read…and my deepst convinctions, themselves…tell me that the discipline of spending playful time with a child, not only develops their spirit, but enhances my own. It took my daughter’s disciplining me to become aware that I am not practicing what I preach.

Here is an assessment tool to help you evaluate how you are doing at the disciplines of play.  Item One:  “Do you intentionally carve out time for soul-satisfying play?”  “How often?”  Item Two:  “Do you play with your kids?”  “How Often?”  Item Three: “What forms of play did you engage in as a child that you still enjoy in some form today?”  Item Four:  My carpenter friends, John, Dave, and my baseball-loving son worked hard to develop skills that allow them to play.  “Is there some form of play that interests you, but first you have to work on some skills before you can experience it as play?” (examples:  ballroom, salsa, Imperial dancing; fly fishing; golfing; tennis; wood working; hiking; canoing; kyaking; sewing; knitting; cooking; baking etc….)?  Are you willing to develop the rigorous spiritual discipline of play in your life?

No telling what a discipline like that could lead to.  I have a feeling it will frequently transport me up into an old walnut tree with one of the of the most rigorous, and enchanting nine-year-old coaches you ever met.

One Reply to “My View from the Treehouse”