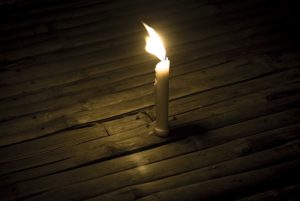 Harry Wagner and I brushed past each other when he was leaving the world and I was just entering it. The proximity of my birth and Grandpa’s death forever linked the two of us. I think that’s why I listened so carefully whenever my dad told his “Grandpa Harry” stories.

The Twentieth Century had yet to enter its teen years, when my grandpa’s dad, Chris, abandoned his wife and three boys to pursue a career in misadventure. A few years later, Harry’s mom died of a respiratory illness, leaving him, and his two younger brothers to fend for themselves.

Before the days of unions or worker’s permits, twelve-year-old Harry went to work in the local coal mine. Icy cold, spring waters would occasionally flood the shafts forcing that little boy, and the rest of his co-workers to labor in chest-high waters. The coal soot that clung to his skin must have also coated his airways. Forty years later, right around the time of my first birthday, grandpa died of something coal-miners called, “Black Lung Disease.”

When I was a boy of twelve-years-old, an oil lamp, used by my grandpa in those dark shafts, occupied a sacred spot in our family’s china cabinet. I would gaze at that little oil pot and imagine working alongside a broken-hearted, soot-covered orphan, wondering what he must have been like at my age.

I would try to picture Harry on the day that his dad went missing. What words did his mother use to explain the yawning, gaping absence in their house? Could Harry detect the fear in his twenty-something-mom’s voice as she tried to explain the unexplainable? Later, would he understand the meaning of his only remaining parent’s late night coughing spells that grew longer, and more violent? As he watched his lively young mother grow weaker, what boy- prayers did he utter? What saint ever prayed a prayer more fervently than a twelve-year-old boy watching the love of his life slip away? What pre-adolescent bargains did he make with the almighty? And who rocked young Harry when the night grew as dark as the shafts he inhabited by day?

This Sunday’s first reading (Wisdom 1: 13-15; 2: 23-24) must have been authored by someone familiar with the bleak territory that my boyhood grandfather inhabited. While simultaneously witnessing to God’s goodness, the author acknowledged the brutality that somehow got woven into our human existence. Did God create death, and all of the many permutations of suffering that people like my grandpa are forced to live through? No.

God does not sprinkle blessings on some while peppering others with cancer, childhood diseases, poverty, alcoholism, or tuberculosis. Our tradition teaches that on the day that my Great Grandma Elizabeth quietly sobbed out of earshot of her boys, that God wept too. When Harry, who had lost a father, then a mother, then his childhood, wept in the darkness, God wept alongside him.

In contemplating readings like this Sunday’s scriptures, JRR Tolkein envisioned God’s creation as a beautiful symphony. While God was bringing his harmonious masterpiece to a conclusion, an outside intruder began banging discordant notes to seed creation with destruction. In response, God frustrated the designs of this evil force. He subtly changed the musical score of his creation to sweep up those discordant notes and blend them in with the design of his symphony. In other words, death and other forms of suffering were not sculpted by the hand of God. Unable to remove them, God was willing to take death and suffering up into his own hands, and transform them into vehicles for new life.

And so, an authentic spirituality does not turn a blind eye to suffering. An authentic spirituality notices the darkness all around us, but simultaneously witnesses to an indwelling Light that pulses at the core of things. Within each of us, there is a Light that darkness cannot comprehend or overpower. For those with eyes to see, that indwelling, pulsating Light is constantly at work attracting, inviting, and persuading us to transform and transcend the darkness.

It was God’s light that persuaded and attracted several families to offer my adolescent grandpa and his brother’s room and board. It was that same Light that heard an orphan’s prayers and eventually attracted a young Polish girl (with a knack for cooking) toward my grandpa. Without benefit of a fatherly role model of his own, miraculous Light showed itself in Harry’s ongoing fidelity to my Grandma Francie, and their two boys—dad, and Uncle Jack.

I think perhaps the greatest miracle of all was my grandpa’s laugh. Anyone who ever knew him would always tell stories of his well-developed, full-throated laugh. I believe that I hear echoes of that laugh in the throat of my own father, and in the belly laughs of my own Wagner children. Given how Harry’s life started, stories of his laugh and good humor represent for me, a kind of holy decision on his part. I believe that his laugh was a kind of proclamation. “Somehow, some way, no matter how dark it gets, Light will always somehow manage to get the last laugh.”

At this snapshot in time, what is the darkness in your life? Have you begun to see any glimmers of God’s Light attempting to shine through it?