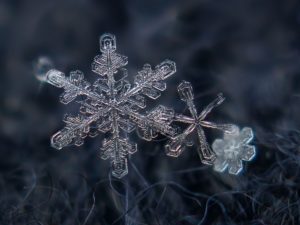 Lizzie, like all other children, never grows weary of revisiting the tale of her nativity.  She is now fifteen-years-old, but by the age of six she has heard it so many times, that if I skipped over any part of it, she would jump in and supply the missing piece.

The bright red breast of the robin foretells the dawning of another spring.  A star shining in the East presaged the birth of Emmanuel.  In the Fall of 2003, Saint Louis saw an infestation of ladybug-like beetles.  Through the telling, and the retelling, ladybugs will always be the harbingers of Lizzie’s impending birthdays.  Besides the presence of ladybugs, the other unique dimension of her delivery occurred at that moment when Lizzie poked her head and shoulders out into the world. As soon as the first breath of air filled the tiny bellows of her lungs, she let out a piercing song that caused all of the Humpback Whales off the coast of California to beach themselves in an effort to swim to meet a new member of their pod.  The decibel level and pitch of that newly calved whale-girl caused the obstetrician to wince, while proclaiming, “Wow!  She’s got some pipes!”  Indeed she does.  From that day forward, Lizzie has had a decidedly resolute voice.

By way of contrast, Lizzie’s oldest sister, Annalise, came into the world reluctantly.  Not knowing what to expect, Lisa took the epidural block designed to limit her experience of labor pain.  Unfortunately this intervention resulted in a lack of sensation that prohibited Lisa from effectively pushing with each contraction.  Consequently, it took much longer to coax Annalise out of her nine-month lair.  As a result of her long stay at the threshold between the worlds, her head was temporarily molded into the shape of a cone.  When my timid first-born finally poked that cone out into the room, she let out a barely audible coo.  If Lizzie was Pavarotti, Annalise was Marcel Marceau.  At every teacher’s conference in pre-school, primary school, and elementary school, my one request was that my introverted Annalise find her unique, strong voice.  By middle school those prayers were answered, and her dad had to remind himself that this was a gift after all.

Annalise joined our family on Leap Day, 1996.  Years and years ago, some previous owner of our first house had planted tiny crocus bulbs all over the back yard. The God who caused the star to rise in the East over a humble stable,  multiplied those bulbs.  Just before her first birthday, and every subsequent birthday, thereafter, crocuses bloom and blanket that backyard.  In our telling of the story of her birth, these flowers are sent by God, especially for her, as a yearly birthday bouquet.  For me, the subtle, blue, persistent crocus will always symbolize my daughter’s subtle, but unmistakably poised and confident voice in this world.

There was nothing subtle about my son’s birth. Not wanting a repeat performance of hour-after-fruitless-hour of laboring, Lisa refused to take any sort of palliative intervention.  Unimpeded, Lisa’s uterus began to sprint toward the finish line.  John Harry was almost born in a 1996 Chrysler mini-van.  After almost giving birth in a van, then a hospital’s lobby, the staff hustled her into a birthing room.  The pressure of one mighty contraction caused Lisa’s water to suddenly break with the “booming” report of a firework.  Moments later, a little firecracker of a boy took his first nourishment from a mother who was destined to sit on the sidelines of countless basketball courts, soccer fields, baseball diamonds, and track circles.  The speed, and firework flair with which he made his grand entrance would mark the way that John Harry has gone about his business ever since.

When I read this Sunday’s Gospel (Luke 1: 39-45), it occurred to me that I’m not the only one whose kids insist that I tell our family’s sacred stories over and over again.  Have you ever wondered how the Christian tradition gathered so many stories related to Jesus’ infancy and birth?  This Sunday, the Gospel writer placed us right next to Mary for a profoundly intimate moment with her older cousin Elizabeth.  How would the author of Luke known of that private moment? Who would have heard her words, “Blessed is the fruit of your womb?”  The answer seems clear.  Just like you and me, Mary “pondered all these [stories] over and over again “in her heart” (Luke 2: 51).  I can almost see her lined, gentle face in the glow of candlelight in a post-resurrection upper room, recounting those early experiences for the disciples. Just like other parents—like you and me—Mary told her stories.  And those stories were jam-packed full of meaning.

During the Advent/Christmas Season, churches set aside weeks and weeks to ponder the mystery of divinity that took on humanity (sometimes called, “the incarnation”).  In the light of the incarnation, we can see that each and every child’s birth represents another unique expression of divinity breaking into our world.

Sometime before or after Christmas, would you consider creating some quiet time to contemplate the joyful mysteries of your own life?  What stories do you know of that prenatal time when your family anticipated your coming? What early stories have been told and retold about your infancy and early years?  Which of your signature strengths were already coming to light in those early years?  Even in the midst of their joyful mysteries, the Holy Family endured some pretty stout challenges.  (e.g. Fleeing to an alien country to escape murder).  Were their people of blessing like the three astrologers who God sent to assist you through an early rough time?  Do you know that when you were born, the heavenly choir sang?  This Christmas season, can you take some time to contemplate the unrepeatable miracle of your existence?

One Reply to “Unrepeatable You”