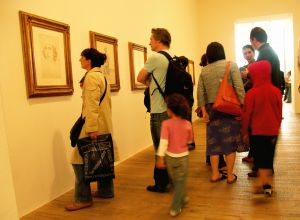 In the Eighties and early Nineties you would regularly find the most unlikely people clustering around pieces of modern art quietly contemplating color, line, and form.  These were not your usual highbrow, champagne sipping, gallery hopping, art aficionados.  These were the common folk like you and me.  In restaurants, rec centers, dorm rooms—it could be anywhere—you would find yourself in the midst of one of these impromptu gatherings of amateur connoisseurs.

In one of these spontaneous art salons, you would regularly observe someone adjusting their footing, telescoping out to capture a wider perspective, then telescoping back in to grasp something in the finer details.  Eventually, you would hear someone say, “I see it!”  They would then go on to describe a previously hidden underwater landscape of dolphins, or alien space ships, or dinosaurs, or something else visually embedded in the portrait.  One-by-one, the holographic images would reveal themselves to those in the audience patient enough to adjust their eyes and wait until the pattern emerged.

In this Sunday’s famous, “Road to Emmaus,” Easter passage (Luke 24: 13-35), it was as if the two disciples, who were walking and talking to one another, were contemplating some unintelligible holographic portrait.  In their discussion, they were squinting, trying to make a coherent picture out of the jumbled, seemingly incoherent facts of the previous week of their lives.  Suddenly, in the midst of their journey, a disguised Jesus joined them on the road, and began the process of helping them see the pattern hidden in plain sight.  At one point, after the breaking of the bread…after the disguised visitor had moved on down the road…the Gospel writer observed, “Their eyes were opened.”  They understood the identity of their mystery companion.  The seemingly disparate events of the past week fell into a meaningful pattern that would give pattern and meaning to the rest of their lives.

I remember when my wife and oldest daughter returned from a three-week tour of the Philippines.  When I asked my Filipino-American wife what she got out of the trip that she had waited four decades to take, she did not have a complete answer formulated yet.  It was as if she were standing too near the portrait to see the hologram hidden in plain view.   She needed a little distance from the experience to discern what she received from that pilgrimage.

Years later, some of the meanings have come into focus.  Some of them have to do with a deeper connection with her daughter.  Some involve deeper connection to her mom.  I know that reality itself is loaded with multi-faceted layers of meaning.  The human soul has an insatiable appetite for understanding.  And so, in years to come, some significant event in my wife’s life will occur that will send her back to reflect upon the trip she took in 2008.  At that future time, she will find yet another frame of meaning to place around that earlier journey.  In all likelihood, a larger, more comprehensive hologram will one day emerge that will incorporate and transform the previous holographic images she discerned way back in 2008.

It seems to me that life is loaded with “Road to Emmaus” moments.  Events occur in each of our lives that are pregnant with meaning, but lay just beyond our soul’s capacity to immediately midwife them out into the light of our understanding.  In moments like these, there is a sense that an intelligible pattern is there, but somehow, like a holographic image, we have yet to discern it.

Our Tradition, informed by the resurrection, teaches that God’s presence pulses at the core of each moment.  Divinity is the source and summit of all that exists.  As a result, even the most humble events in our lives contain meaningful holograms.  For those who are willing to take the time to contemplate, eventually, meaningful patterns will always emerge.

One of the messages from this Sunday’s Gospel is that mysticism is not just for the high-brow, professional spiritual aficionados like Ignatius of Loyola or Theresa of Avilla.  Mysticism (defined as a direct friendship and communion with Christ) is now available to common folk.  Like the disciples in this week’s Gospel narrative, we have to be willing to stand before the parables of our own experience and contemplate them with a reverent expectation that meaning will emerge in time.  With the aid of prayer, scripture, the sacraments, reflection, and a vibrant faith community (that could include spiritual mentoring or counseling), meaning will eventually emerge.

In the words of a famous slogan, “God isn’t finished revealing himself yet.”  For you and me, each day is a journey on the Road to Emmaus.  Christ is present to you right now disguised in the seemingly humble events of your God-drenched life.  Are you looking for the pattern God is trying to reveal to you?