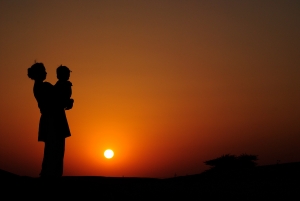 I checked.  My wife was right.  The tag really did read, “Extra Small.”  Despite this fact, the hems of Lizzie’s circus-tent soccer shorts were clearly overlapping the hems of her socks that stretched and folded just below the ping-pong-ball-sized bumps of her four-year-old knees.  Lizzie explained to me that her brother’s old soccer jersey had to be “flounced” (i.e. untucked a few inches).  This would allow her number, “35,” to emerge from below her waste line to be made visible to the world.  “No doubt,” I thought to myself,  “she is attempting to help the sideline statisticians keep track of “Number 35’s” many goals and assists.”  As I observed the folds of synthetic material draped over my diminutive daughter, it occurred to me that a stout gust of autumn wind could cause her to unintentionally windsurf.

Uniforms rarely provide much latitude for self-expression.  Nonetheless, my petite Flo Jo found a way to infuse her soccer debut with a little personalizedje ne sais quoi.  A rainbow colored headband pulled her, “Dora the Explorer,” hairdo back, allowing her smiling, almond eyes to track the movements of both ball and crafty Pre-K opponents.  Several yellow,  “Livestrong” wristbands that were scavenged from her brother’s and sisters drawers, adorned her arms to provide a medicinal dose of motivation should the rigors of the impending game sap her of energy and willpower.  Everything about this little firecracker of a girl indicated that she fully intended to leave it all out on the field.

Since the time Lizzie was an infant, she was carried, pushed and carted to innumerable sibling soccer events.  For many years, she listened to parents celebrate the joys of victory and grieve the agonies of defeat.  From her stroller, Lizzie watched as her brother and sister stood in the limelight of parental attention.  Now was her moment.  This was her hour.  She intended to shine.

And shine she did.  On the day of her first soccer game, I was quite sure, that with the proper fittings, Lizzie could have lit up the greater Saint Louis area. “If she was any cuter,” an opposing parent observed, “she would explode.”  From my totally unbiased position in my bag chair, I was forced to agree, and to simultaneously observe that if I were any more filled with delight in my little Mia Hamm, I might also spontaneously detonate.

In this Sunday’s first reading, Isaiah (5: 1-7) delivered a sober message from the God of Abraham, Isaac, and Jacob to his chosen people.  With a decided absence of subtlety, Isaiah presented an allegory in which Israel was compared to a cherished vine planted by the hand of God himself.  Despite all his best efforts, the owner of the vineyard found, that in place of choice grapes, his carefully tended vine produced sour, useless fruit.  In the end, the disappointed vinedresser gave his property up to grazing, drought, thorn bushes, and weeds.

Isaiah was preaching during a period of Israel’s history in which she was losing her character as a covenanted people.  The signature characteristics of justice and mercy had somehow gone missing in their dealings with one another.  And now, Isaiah was prophesying that Israel would reap the bitter harvest of what she had been sowing.  Given the frightening events of Isaiah’s time (i.e. aggressive, threatening neighbors, possible economic collapse) God’s not-so-veiled threats must have sounded particularly ominous.

When I hear this passage, and other scriptural passages like it, where God is threatening to wipe out his people, I always hear them with the ears of a dad.  “Could my little soccer-loving daughter, Lizzie, ever do something bad enough to make me want to destroy her?”  Is it possible that God the Father of Jesus and you and me would be less loving to us than I would be to my own children?  Everything in our tradition provides a firm answer to that question.  My feelings for Lizzie on the day of her soccer debut were just a small taste of how God feels about you and me.  So how to make sense out of these kinds of readings?

Many years ago, when John Harry was about the same age as the Lizzie in this story (i.e. four-years-old), he was engaged in some early morning annoyance. Despite my repeated efforts to get him to stop his obnoxious behavior, he continued.  At one point, I stopped my chores, glared at him, and threatened,, “John Harry, if you don’t stop doing that, right this minute, I am going to dip you in maple syrup, hang you from that light fixture, and let the bees loose on you.”  As I finished my tirade, I looked over and saw him smiling.  “Why are you smiling?” I asked him.  In a self-satisfied tone he replied, “Because I know you won’t do that.”  “How can you be so sure?” I struggled to maintain a tough tone.  “Because you have Jesus in your heart, and so you’re going to love me.”  “Rats!” I thought to myself.  “He’s right!”

In a similar fashion, the same mother who sat through my soccer games, took me to pools, beaches, parks, lessons, and fed my soul with her spontaneous, and irresistible delight in me was the same woman who would occasionally threaten to “beat me bloody.”  I knew better.  She had Jesus in heart.

When you or I choose pathways leading to inevitable and needless suffering, God suffers like a parent who would do or say anything to get us to change our poorly chosen course.

As you contemplate this week’s readings, and other readings like them, will you remember to place them into proper context?  No matter how ominous things seem, you are the equivalent of God’s Lizzie, John Harry, or Annalise.  Jesus is the revelation that you are the apple of God’s eye.  God is exploding with delight in you.