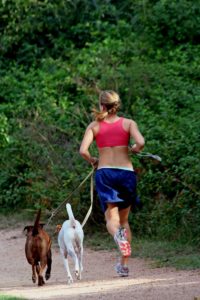 Right around the time period when Forest Gump donned his first pair of Puma’s, a friend invited me to do a thing he called, “jogging.”   At the time, I was understandably reluctant as it had been several years since I had done anything truly athletic.

While I had signed no formal letter of intent, nonetheless, at the start of my high school career, I had made an informal commitment to the RJ Reynolds Tobacco Company.  I agreed to smoke a pack-and-a-half of Marlboro’s a day throughout high school. In turn, they agreed to take my money and my childhood passions of basketball and soccer away from me.  By the time I was nineteen, I felt as old as Fred Sanford.  Even moderate physical activities made me feel like Elijah’s sweet chariot was coming for to carry me home.

The invitation to jog came the summer after high school, when I had severed all contact with RJ Reynolds.  Nonetheless, the call to run beside and between cornfields on a hot, sticky, rural road for no apparent reason, conjured up painful memories of coughing, hacking, and pounding headaches.

On that 1980 Saturday in June, my friend manifested a latent talent for sales.  “Come on, just one mile!  We can walk whenever you’re tired.  I’ll take it slow…just to the creek and back….”  When all this failed, he took out the big guns.  “Come on you wuss!  Maybe I’ll get your little brother to come instead.  No wait.  I’ll bet your mom could do a better job running than you.  Hold on.  What’s your grandma’s phone number?  I’ll ask her.”  After the insults failed, came the offer to treat me to a post-jogging blueberry “Slushie.” That sealed the deal.

It would be hard to read this Sunday’s Gospel (John 6: 51-58) and come away believing that Jesus had any latent interest in a sales career.  If his intention was to get a large throng to start running with his Apostles and him, then all that talk of eating his body and drinking his blood was no way to seal the deal.  Later in the chapter, the crowd that had previously been running with him abandoned him and “returned to their former way of life” (vs. 66).

Centuries later, a Dominican priest, Thomas Aquinas, discovered a more palatable way to describe the Eucharist.  In the ancient writings of Aristotle, Aquinas found a philosophical way to describe what Jesus was talking about in today’s Gospel.  He called it, “transubstantiation.”  That multi-syllabic way of describing God’s presence in the Eucharist has to do with God’s use of humble, everyday elements (i.e. bread and wine) that are transformed into vehicles to deliver divine presence.

Here on a Sunday in August, 2015, thirty-eight pairs of jogging shoes after that fateful summer’s afternoon, I find myself reflecting on how God uses seemingly small, subtle, insignificant events to change the course of a life.  On a lazy, otherwise unremarkable day, God took the simple elements of a friend’s hobby, along with his willingness to persuade and cajole, and turned them into an opportunity to give me back my body along with my forgotten love for athleticism.

One of the lessons of this Sunday’s Gospel is that transformation is not found in the grand gesture.  It is found in the tiny things…like daily bread…like a good habit practiced over and over again…like communion received week-after week until the nightfall of life.  God leaves his most profound and transformative fingerprints on the subtle, small things of life.  In what small way could you cooperate with God’s plan to pour more joy, and more love into your days?