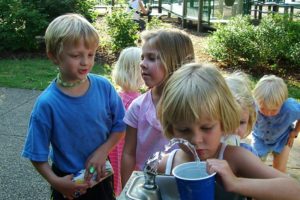 I came along right after the Catholic flavored clump of Baby Boomers had made their way into the world.  At that time, it seemed like you couldn’t build Catholic schools or churches fast enough to keep up with the flow of those little Catholic GI Bill babies. Our founding pastor, Fr. O’Connor had every good intention of getting around to building us a gymnasium.  But by the time he had finished erecting his church and school buildings, cost overruns and debt prevented him from the final, finishing touch of an indoor gym.

The kids had to play somewhere.  Our pastor solved his problem by applying a thick wall-to-wall carpet of asphalt to virtually every square inch of green space that had once grown corn and soybeans.

On a hot day, the ultraviolet rays of the sun would beam down upon the sticky, heat absorbing, dark pavement.  The surface sealant would begin to liquefy, creating a kind of perfume that would entice and tease desk-bound little boys to distraction. The sweet seductive aroma of cooking asphalt would drift into our classroom like an exotic, wild perfume. Only a boy’s ears (and a brave few pre-Title 9 girl’s ears) could hear the whispered message encoded in that delicious smell: “Recess!”  “Recess!” The ADD-inducing properties of sun-baked asphalt would then kick in.  Even the fear of Sister Mary Regis couldn’t keep our promiscuous boy consciousness from drifting out the window imagining ourselves starring in a sports video that involving some kind of ball, and speed, and an amazed playground audience.

A Midwestern ninety-degree afternoon served up on a plate full of asphalt translates into heat indices somewhere into the range of fried food. If one looked across the horizon of the playground on an afternoon like this, the heat waves would create the optical illusion of pools of standing water.  Then again, perhaps those pools were real, containing the collected perspiration of boys like me who had only two speeds available to them during their play, “full throttle,” and “beyond.”

It was on asphalt afternoons like these that one could really appreciate the outdoor water fountain just outside the sixth grade windows under a towering silver maple.  The old lectern shaped bubbler wasn’t much to look at.  The bluish paint had mostly worn off exposing the dull metallic gray below.  Summoning the water was something of an art form since the foot pedal had long ago fallen away.  The silvery knob that remained was polished smooth and slippery by thousands of thirsty, impatient elementary school feet.

If you operated the knob exactly right, it would take a full several seconds for the water to finally arrive.  If your foot pressure deviated even a fraction of a millimeter to the left or right, your wait would produce nothing but more thirst.  For those who didn’t give up on those asphalt afternoons, the wait was deliciously rewarded.

Up from the depths of the naturally refrigerated part of the earth’s crust would arise a gush of refreshment forced into your dry-as-a-desert mouth with the might of a miniature fire-hose.  The delicious water from that old fountain was made that much sweeter from a deep-down thirst resulting from a gymnasium-free afternoon of basting in an asphalt skillet.

Embedded within the Gospel this Sunday is the line, “No one can come to me, unless the Father who sent me [draws them]…” (John 6: 41-51).  Have you ever considered the practical methods that God uses to draw women and men?  Anyone who has watched parched children on an asphalt afternoon circle around an unattractive old fountain knows the answer to that question. It’s the thirst!

Anyone who has pursued spiritual maturity knows that the most important gift in the quest for the Holy is a thirst for God and the things of God.  Only the thirsty seek out water.  As a spiritually informed counselor, I frequently hear from a man or woman who furrows his or her brow and says, “I just wish I could feel God more near to me.” When I hear these words, I know that God is on the move creating a thirst for Living Water within the depths of his or her soul.

Sometimes the thirst arises from a string of poorly made decisions leaving one parched and dry.  At other times, decision-making has nothing to do with it.  A tragedy arrives like a brush fire, leaving the inner landscape feeling charred and brittle.  In other instances, a soul that has enjoyed years of divine intimacy continues going to the same old pools to be satisfied with Living Water.  Sometimes God allows those well-worn watering holes to dry up, forcing the believer to seek out a new flow from other sources.

In each of these instances, like a thirst that causes a child to interrupt his or her play, God draws men and women to desire ever- deepening levels of intimacy with the source of Living Water.  The important thing is to understand that the thirst itself is a sign of God’s presence and promise of future fulfillment.

This week’s scripture asks you and me to develop a greater awareness of our thirsts.  Like Elijah in the first reading (1 Kings 19: 4-8), we are invited to wake up to the possibility that a gush of soul-quenching, delicious fulfillment is on the way…for those who will remain at the Fountain and wait.