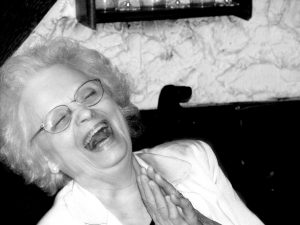 Just over my shoulder, a chorus of laughter broke out that is usually associated with Monty Python cuts, or milk passing through a nose at a grade school lunch table.  I turned from the party dishes soaking in my sink to see my friend Jerry failing miserably at transferring leftover party food into a Zip Lock bag.  Standing not five feet from him was my old friend, Sue, taunting him with one-liners, including, “You see why I could never marry you?”

By the time I met Jerry over thirty years ago, he had been friends with Sue for just about four semesters of college life.  It would take Jerry and Sue nine more years from that time to finally shift gears from best friends to sweethearts.  Two years after that, they were engaged to be married.  But, a funny thing happened on the way to the altar.  Like a can continually getting kicked down the road, their wedding date was postponed, once, and then twice.  Finally, on the way to my wedding, five hundred miles away, Jerry and Sue decided to throw in the towel for good.

To come so close, and end up so far from their intended target led to some inevitable frustrations and hard feelings on both sides of the breakup.  It would take several years, and one fulfilling marriage each (to Dawn, & Ray respectively) for the both of them to be able to comfortably occupy the same space at the same time.

In this Sunday’s Gospel (John 14: 15-21), a basic Christian anthropology is outlined.  An undying, indwelling reservoir of grace is available at the core of our existence.  As a clinician informed by this kind of spirituality, I am fascinated by that place in the human soul where God’s Spirit intertwines with the human spirit…that place where the promptings of grace attract the will toward decisions that favor self-transcendence, self-donation, and greater freedom.  I am continually fascinated by what cooperation with that deepest part of the self creates.

Listening to the familiar sound of these two old friends laughing together was like catching a few stanzas of a long-forgotten church song from my youth.  Together, they transformed my humble, food-stained Linoleum kitchen into a makeshift chapel.  From my perch at the sink, I could see back through several decades, observing various versions of Jerry and Sue, in various states of emotional equilibrium and disequilibrium.  Being best friends to both of them, I was privy to the hundreds of little decisions that went into the making of this moment.

That commingled laugh of Jerry and Sue was the product of years and years of God’s Spirit issuing invitation after invitation to deeper self-reflection, leading to more profound self-knowledge, forgiveness, and healing.  Both of them had resisted the many temptations to choose self-pity and resentment as their final destinations.

The other unseen graces that served as a prerequisite for this holy moment included the many accepted invitations that the Holy Spirit issued to both Ray and Sue, and Jerry and Dawn to work on their respective relationships.  Such seasoned, secure marriages served as necessary prerequisites for the reemergence of this old friendship.  The miracle of this musical laughter was the fruit and flower of an unseen root system composed of grace, and hard work.

As I stood at the sink, it occurred to me that if there is a sound track to the divine activity in the human soul, it is probably the musical sound of a good, hearty, wholesome, belly laugh.  A life lived with a fundamental “yes” to the Spirit’s invitations issued from one’s inner-most core will inevitably lead to a deep, resonant joy.

At one point in the evening’s festivities, thirty plus people gathered round to join hands in prayer.  As I looked up, I saw thirty-plus people who, like Jerry and Sue, had dedicated their lives to following that indwelling, undying source of humor, love, and life.  Around that circle of smiling, prayerful, souls was one who had lost her breasts to cancer.  There were three who almost exactly a year ago, had lost their father to suicide.  Two more were in the process of losing their dad to Alzheimer’s disease, and their mother to Parkinsons.  There was one who lost a mother in a tragic accident.

Looking around that circle, it occurred to me that I cannot guarantee my children a life without suffering.  But I know that my first priority is to surround them, and immerse them in a community of people who prioritize a life rooted in Spirit.  This, in turn, gives them a solid opportunity at animating their lives with a deep-down, soul-satisfying laugh that is stronger than whatever life can throw at them…even death.