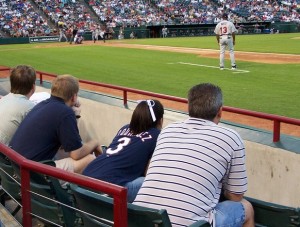 As I put my fingers to this keyboard, the outcome of the 2016 World Series has yet to be determined. Last night, a pitcher’s duel shifted the momentum of the series away from the the Chicago Cubs, in favor of the Cleveland Indians whose ace will pitch tonight against the home team who are now down one game to two in the series. Who knew that a dyed in the wool Cardinal’s fan could actually empathize with the the sometimes despised, and always pitied Cubs fan base. In fact, I think I know exactly how they feel.

This time, three years ago, Adam Wainwright, the Cardinal’s ace, had just dropped the fifth game of the World Series, shifting momentum to the Boston Red Socks (the same bullies who swept the 2004 World Series from the Cardinals). I assume that Cubs fans this morning, are handling their tragedy in the same way I did after a similar defeat. After a significant loss, I regard all media outlets the way a mother bird regards a hatchling overly handled by humans. The radio dials in my kitchen and car remain untouched; the sports page unruffled. I studiously steer a wide swath around all things baseball.

On the other hand, if Chicago Cubs fans are anything like me, and their home team somehow pulls out a victory tonight, then they will not only be reading their own local paper (Chicago Tribune), they will be reading their opponent’s local paper (Cleveland Plain Dealer). Along with their Sunday morning coffee, they will be enjoying a side order of fresh schadennfreude. If I were a Cubs fan, and John Lackey wins the pitcher’s dual, then tomorrow, I would be searching out sports talk radio shows and listening to them while I drive, cook, clean, toilet, and shower. If I were a Cubs fan, and my team won the world series, I know just where you would find my kids and me. We would be occupying the kinds of places we occupied on two previous post-World Series Sundays in October (10/28/06; 10/30/11). We would be up in the trees lining the victory parade route downtown trying to catch a glimpse and maybe even a smile from the victorious boys of Fall Ball.

In this Sunday’s Gospel selection (Luke 19: 1-10), the audience was given just enough detail to find out that the main character, Zacchaeus, was something of a climber himself. Though a Jew, he became wealthy by ingratiating himself with the local occupying forces to receive a choice position on the payroll. His job was to take the hard-earned money from his fellow countrymen, and give it to the Roman Empire. Along the way, he lined his own pockets with money that his position allowed him to extort. In the eyes of his fellow citizens, this man was of small moral stature. By the end of the passage, Zachaeus had become a different type of climber. From his perch in the sycamore tree, he saw and heard something that caused a shift in him.

Psychological research has long noted the prevalence of defenses that protect us from experiencing the full-force of anxiety flowing from dysfunctional choices and behaviors. As a counselor, I frequently encounter a defense known as, “splitting,” in which the subject unconsciously divides up reality, focusing only upon the part of reality that makes him or her feel better. Like a Cubs (or Cardinals) fan trying to forget about a bad game, the painful parts of their life are kept out of sight, and out of mind. This, more or less, would have been the psychological process at work in a person like Zacchaeus who was doing what he knew was wrong.

In this Sunday’s reading, we see why one of Jesus’ nicknames was, “Wonderful Counselor” (Isaiah 9:6). When researchers study effective counseling technique, what they always discover is that the most powerful tool that a therapist carries in his or her belt is a sense of deep acceptance and care for the client. In this Sunday’s passage, Jesus didn’t look up into the tree where Zacchaeus was perched and demand that this public sinner change his ways as a prerequisite to relationship with Jesus. Rather, he showed care for him just the way he was. In the context of this warm acceptance, Zacchaeus began a process of acknowledging the split-off parts of the self, which led to deep and lasting change.

In light of this scripture lesson, if there is something that you have been avoiding looking at, perhaps this would be a good week to call someone in my profession (i.e. a counselor). Within the safe container of confidentiality, and deep care for you, perhaps your anxiety and shame can be contained well enough for you to face what you have been avoiding. Likewise, if you know someone whose splitting takes the form of ignoring the abusive side of a friend or significant other, in order to preserve the relationship, perhaps you could resolve to maintain contact with this person. Over time, your love and acceptance may allow them to face some previously ignored truths about their friend, and their own reality.