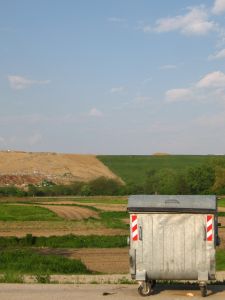 The penthouse sunroom that I called, “home,” was nailed onto the backside of a third floor flat adjacent to the fire escape that doubled as an urban balcony/patio.  The casual onlooker wouldn’t necessarily think of it as a prime piece of real estate.  A busy cockroach highway ran between the Pakistani restaurant at street level, through our downstairs neighbor’s pipes and ductwork, exiting in the kitchen just outside my door.  My room was too small to accommodate a bed, desk, and chair, and so I shared the floor with the occasional six-legged companion who had wandered in from the kitchen.

In addition to that financial windfall, my miniature cubic domicile profited me in another unexpected way.  Our apartment complex was part of a large network of buildings constructed for the Washington University student who had grown weary of the vicissitudes of dorm living.  Positioned as it was on the non-street side of the apartment, my be-windowed sunroom gave me an unencumbered view of the dumpsters of America’s best and brightest students.  That meant, that on a parent’s weekend, when mom or dad took Chase or Brook on a shopping spree to the Pottery Barn, I was the one who got first dibs on their gently used castaways.  The motto inscribed on my personal coat of arms in those days was, “Finders Keepers.”

The Gospel selection for this Sunday (Matthew 21: 28-32) indicated, that when it came to disciple selection, Jesus was something of a dumpster-diver himself.  Where others saw prostitutes and tax collectors, Jesus saw opportunities.  And it’s been like that ever since.  In the church that is infused and animated by the Spirit, our best and brightest have often been fixer-uppers salvaged from the various dumpsters of life.

Before the carpenter’s son stripped and sanded the scales from his eyes, Paul of Tarsus was a Taliban-like zealot who persecuted and murdered early church members.  One of the earliest triumphs of Christendom was the quiet heroism exercised by our early church mothers and fathers who stepped forward and forgave Paul for slaying their sons, daughters, and grandchildren.  Their forgiveness and eventual acceptance of a man, who appeared to be nothing more than a terrorist, allowed him to become one of the foundation stones for all of Christianity.

In his famous memoir, The Confessions, Augustine of Hippo described how his Christian mother, Monica, saw the saint underneath a young adult lifestyle that included sexual addiction and other misadventures.  Through the doorway of her prayers, God chipped away until the essence of Saint Augustine was released from his self-made prison.

The Gospel of John recounts the story of perhaps the very first preacher in the Christian tradition.  Just after her encounter with Jesus on a hot summer’s afternoon, the “Woman at the Well” went out to tell the story of her conversion.  Several centuries later, Augustine could publish his unabridged memoire without fear of reprisals.  It is hard to imagine what could have happened to this brave Middle Eastern woman as she shared her “confessions” with the crowd of eager listeners.  This brave woman of five husbands and untold lovers, was literally like a stone rejected over and over again.  Jesus saw in her one of the cornerstones on which he would build his church.

Do you pray for spiritual leaders?  Pray that God would open the ears of a future Augustine who may be just now wandering down the fruitless pathways of compulsion and adventurism while his family worries and prays.  Pray that God will open the eyes of someone like a future Paul of Tarsus to acknowledge that the zeal of his certitudes has blinded him to the life of humble service to which he is being called. Pray for leaders who can manifest the courage of the Woman at the Well to witness to the life-giving compassion of a God who redeems, heals, and calls women and men forth to leadership.

Do you pray for yourself or a loved one who is wandering in some dark valley?  Understand that you are not alone.  The Church is built on the foundation of people like you and me—people who felt like their mistakes and wrong turns had placed them in some sort of dumpster, only to find that their life had been snatched up, turned into a gift, and handed back to them free of charge.