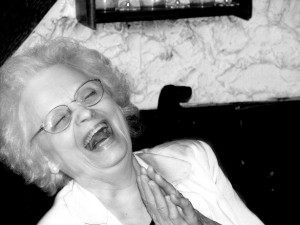 I remember when the four-year-old version of Lizzie (now 13) met Death for the very first time. He introduced himself to her at our dining room table just after meal prayer on a Friday night. It wasn’t like this was her first opportunity or even her second. By then, she had stood three times tangled in adult legs while one or another parent silently whispered prayers beside an open coffin in a funeral parlor. On those occasions, coy Death chose to remain hidden in the crowd just beyond the reach of Lizzie’s two or three year-old consciousness. But with the cognitive development that comes with being four-years-old, Death unexpectedly, and abruptly joined us for dinner.

For the three years previous to this, Lizzie’s great grandpa, Juan, had been frustrated with Death’s lack of punctuality. It may be that Death was just passive-aggressively giving Juan a taste of his own medicine. During the occupation of the Philippines during World War II, Juan kept a sharp lookout. Whenever the Grim Reaper tried to meet up with him or anyone else in his family, Juan cleverly outmaneuvered him.

When the Japanese took over Manila, Juan whisked his family into the lush countryside to hide them. When the drone of strafing warplanes could be heard overhead, Juan spirited his kids out of their hut into the cover of the dark jungle. Who knows how many times Juan denied business to the local mortuary?

Sixty years later, when we visited Juan in his nursing home, Death was getting the last laugh in the final moves of this 95-year-old chess match. Stripped of his wife of seventy years, and many of his physical and mental capacities, Juan was all done with delaying mortality. He sat vigil by his window waiting while Death got even by dallying and dithering on the way to their appointment.

On the Feast of All Saints nine years ago, Death finally gave in and graciously escorted Great Grandpa Juan home to a reunion with his wife, Ambrosia. Our son, John Harry (named after Juan and another Caucasian great grandpa), had been praying that his namesake could be speedily reunited with his wife.

On the day after his death, just after John Harry’s meal-prayer of thanksgiving, a small trickle of liquid could be seen flowing from Lizzie’s four-year-old eyes that were just now growing wider with a dawning recognition. “I don’t want to die!” she wailed. With those words, sprinkles of water fell from her eyes seasoning her plate of leftovers.

Every father of a four-year-old knows the paralysis of these moments. In other circumstances, a flashlight under the bed reveals a monster-free environment. In this circumstance I felt like Job standing silent before the breathtaking mystery of human suffering and Death. I felt more like a colleague of Lizzie’s than her father. I found myself simply hugging and rocking her answering her repetitious refrain of, “I don’t want to die,” with, “I know honey.” “I know.”

In this Sunday’s Gospel (Luke 20: 27-38) , some friends of Death came to trip up the Lord of Life. Sadducees were a community of lawyers who did not believe in life-after-death. On this occasion, they showed up with a hypothetical situation jam-packed with lawyer-logic. Jesus dealt with these city slickers as if they were merely static on the radio. By the end he had tuned out their question and tuned them into a fundamental truth. “…he is not God of the dead, but of the living, for to him, all are alive” (vs. 38). Like any good teacher, Jesus used multiple media to educate his students. In this short section, he used words. Later in Luke’s Gospel, through the audio-visual of his own death and resurrection, he demonstrated how death itself was transformed into the gateway to everlasting life.

It seems to me that when it comes to death, there are two interrelated and essential insights for a spiritually informed man or woman to absorb. Like my four year old, we must have the courage to look our own death squarely in the face and embrace its inevitability. The second insight has to do with resolutely dedicating ourselves to resurrected living every moment until we die.

The concept of the resurrected life after death provides a kind of comfort when contemplating the reality of dying. But resurrection as a way of life to be lived here and now takes courage, a faith community, the sacraments, the holy scriptures, and constant, intelligent, intentional focus.