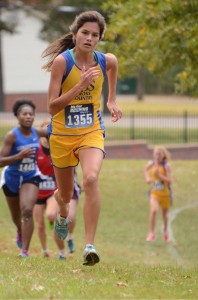 Every once-in-awhile, Life has a way of lifting you up, and placing you on a scenic overlook to peer down on your own existence.  From that elevated position, you can glimpse a whole section of the journey, and see patterns that were unavailable when your attention was focused upon the micro-scenery of each individual footfall.

Tuesday night, at my daughter’s Cross Country banquet, I suddenly found myself on a promontory overlooking the high school sports section of her life.  In honor of the teams’ concluding season (my daughter’s final high school season) my wife stayed up until three in the morning weaving together pictures, and video clips she had solicited from other photographer-parents.  She created a video presentation filled with humor and beauty.

One moment, I was looking at images of a gritty long-distance runner willing herself up hills past opponents.  The next moment, it was as if I had stepped through C.S. Lewis’ magical closet in The Lion, the Witch, and the Wardrobe.  Momentarily endowed with special powers, I found myself hop-scotching through time, watching the video of my daughter’s running career unfold.

Sling-shotted back almost eighteen years, I saw there a father, who looked a lot like me, except with more brown hair.  He was placing his baby girl in a rusty, neon pink, garage sale jogging stroller.  Towels held her head steady, while layers of blankets kept away the dew.  Many times a week, her mom and dad co-created stories with her, while burning off the stress associated with graduate school and work.  With the addition of a younger brother, a double-wide jogging stroller replaced the rusted model.  As the years added up, Annalise stepped out of that stroller, and joined in with her parents on 5k runs.  In Sixth grade she trained hard, and won her age division in her community’s Thanksgiving Day 5k with a time of 21 minutes and 25 seconds (a feat that her brother replicated several years later with a time of 20 minutes and 21 seconds).

From this triumphant moment at the finish line, my imagination was abruptly escorted to a soccer field.  There I saw that same willowy middle school girl streaking after a ball lobbed thirty yards in front of her.  Her giraffe legs voraciously ate space until she overtook the ball, setting up a teammate for a score.  Since the time Annalise read about Mia Hamm, she wanted to play Division One soccer someday.

The scene then shifted from a soccer pitch to a dinner at Panera’s three years ago that changed the course of her high school career.  Let me explain.  In high school, the girl’s soccer season takes place in the spring.  The absence of high school soccer in the fall created a sports vacuum for Annalise.  She decided to fill that void with Cross Country in order to stay in shape for soccer.  Ironically, she experienced way more successes in Cross Country than she ever did in soccer.  Her times improved with each race.  She capped off her first season by achieving a spot in the coveted State Meet.  At the end of the season, her coach explained, that to achieve ongoing success in long-distance running, she would need to run year-round.  Annalise’s life-long soccer friends wouldn’t hear of it, and so she wouldn’t hear of it.  Sensing that an opportunity might be slipping away, the night before Annalise had to pull the trigger on her spring sport decision, I arranged a dinner for her.  I invited her high school idol, Colleen Quigley, and her coach/father to join us at Panera’s.  Colleen had been breaking state records in long distance for the previous couple of years (since then, she’s been breaking national records on her way to a potential bid for the Olympics).  Colleen and her dad prevailed upon her.  The next day, Annalise set her soccer career aside.  With her decision made, it seemed to me that a trajectory for my daughter had been set.  The sky was the limit.

Like Colleen Quigley before her, Annalise broke onto the long distance running scene as something of a phenom.   Through the course of her Freshman and Sophomore years, she broke her own personal record many times, and made it past the qualifying rounds to reach the State Meet each year.  But a funny thing happened on the way to the Olympics.  Her long distance running career leveled off, and began declining during her junior year.  Like the previous two years, she made it to State, but failed to make the kind of showing that she and her coaches anticipated.  Despite some improvement, her performance during Senior year ended much the same as her Junior year, but this year, instead of the disappointment I expected to see in Annalise’s eyes, I found her at the finish line celebrating the achievements of her fellow team mates who finished ahead of her.

Four years ago, I thought I knew the pattern that would have emerged in my daughter’s running career.  Instead, a very different pattern surfaced.  Through the course of this season, Annalise has shown herself to be a very adept leader, motivating and celebrating her teammates to ever-higher levels of achievement.  In her first two years, Annalise was able to qualify for State.  In her final year, as team captain, she led a whole team of underclasswomen to state for the first time in many, many years.

I thought God would use Cross Country to get my daughter to the Olympics.  Instead, God used Cross Country to root life-long skills and grit into my daughter’s soul.  Throughout the course of Advent, the Christian Tradition will take notice of how it was that everyone thought they knew what the anticipated Messiah would look and act like.  As usual, God’s ways broke the confining mold of their expectations.  All Advent long, you and I will be invited to wake up to a foundational grace…the grace to let go of the pattern we had anticipated life to follow, in order to accept the grace-filled pattern of what is.