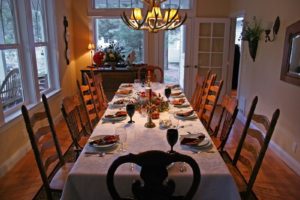 As November rounds the bend toward the holidays, Midwestern expatriates, once again, will be reminded of why they moved to San Diego, Phoenix, or Florida.  This is the season when wind-swept, frostbitten, soccer moms and dads long for volleyball, and basketball seasons.  This is the time when browned fields of corn and soybeans give way to vast, snow dusted landscapes of lonely stalks and stubble.

This is also the time of year when my kids used to train for one of our sacred family traditions:  the Thanksgiving morning, 5k, “Turkey Day Run.”  Ten years ago, my long, lean, eleven-year old, Annalise, successfully set out to win her age division and break the time she had set the last time she ran this race.  For three years after that, John Harry, her younger brother, trained by jogging three miles every November morning to school in an attempt to match his older sister’s accomplishment.  Each year, he came up just a little bit short.  I can recall the jubilation when, after their training, both he and his first grade sister achieved their goals.  He won his “Twelve and Under” age division, and Lizzie, my first grader, completed her first 5k without taking a break to walk or rest.  This year, my daughter will serve as one of the team captains for her university’s track team.  As a Freshman, her brother will run two events on that same team.  My youngest, now fourteen years old, places her running skills at the service of chasing down soccer balls and basketballs.  As I look back on their accomplishments, it still seems like just about a hiccup ago when my kids were toddling toward my outstretched hands, experimenting with the concept of bipedal locomotion.

During this time of year, changes come over me as well.  I instinctively begin to gather my dog-eared, tried, and true recipes for what every family cook regards as the culinary high-holy day of the year.  It took decades for my latent love of all things gastronomic to finally germinate and produce the fruit and flower of a part-time career:  family cook.

Many years ago, the casual visitor at my table would have been hard pressed to discern even so much as a caraway seed’s worth of this hidden talent.  When mom went back to work, my high school brothers and I took turns preparing dinner.  During that time, I was known for such culinary classics as marinated cube steak, sauted in Italian dressing.  More chew-toy than dinner, this gag-inducing meal was the genesis of the ultimate Wagner family malediction, “Eat cube steak and die!”

During my years of bachelordom, I was well known for my quirky attempts to achieve a balanced diet.  My trademark meal consisted of a can of sardines, a crunchy apple, and a side of boiled broccoli.  In those days, my answer for a hot meal was a can of beef soup poured over a micro-waved potato.  My roomies knew I was serious about Lisa when I pulled out my fancy recipe: a grilled, boneless chicken breast from Sam’s,  topped with a wheel of canned pineapple, fastened with a toothpick.  Fancy!

Over the last few years, my cooking has evolved.  This year, for Thanksgiving, I’ll bake three kinds of bread including fluffy, buttery rolls.  A leek, sage, sausage, and bacon dressing will accompany a turkey brined with herbs pulled out of my own garden.  The meal will conclude with a choice of pumpkin, apple, or pear-butter and vanilla pie.  This year, I’ll whip a neighbor’s ripe persimmons into some sweetened crème to provide a homegrown, Midwestern topping for my desserts.

How do you get from inedible cube steak and sardines to pear-butter, and vanilla pie?  How does a child travel the distance from a wobbling toddler to a Chariots of Fire 5k kid?  As a counselor and a dad, I often ask myself, “What is the key to nurturing talents, and positive changes?”

One of life’s great tragedies is to die with an unexpressed talent buried inside the inner vault of one’s fear.  Over the years, I have learned that fear and an inordinate focus on deficits must be transcended in order to take the necessary risks to grow a talent.

This time of year, the methodology to transcend fear and a focus on deficits is all around us. It is part and parcel of the genius that is our American feast of Thanksgiving. Watch an effective parent coax “walking” out of a toddler.  As the first little steps emerge, you almost never hear a parent critiquing their new little biped, “You call that walking?  You look like a little Frankenstein!  Here, let me show you what you’re doing wrong!”  No.  The parent appreciates even the smallest approximation of bipedal locomotion.

It has been said that “what you appreciate, appreciates.”  The stepping stones that led my culinary skills from sardines to sauces was the appreciation my wife and family showed for each new entrée or recipe that I tried.

What is the change you are looking for in yourself, your spouse, or your children?

What is a talent that you know lies unexpressed within?  See if you can begin to consciously notice and appreciate even the smallest approximation of the change you seek.