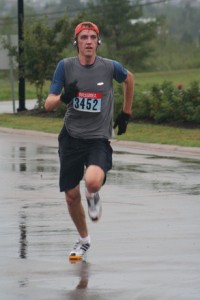 Some years ago, Lisa braced herself for a courageous appointment with reality. She fearlessly pried open the calendar and peered down through the months all the way to May 14. There she observed the specter of a menacing milestone birthday glaring back at her. As my wife felt the swells of a midlife crisis lapping against the shores of her consciousness, she sat down and immediately began to calculate realistic methods to channel this frightening force of nature.

Her values were too substantial and our bank account was too insubstantial to fund midlife shopping sprees at car dealerships, department stores, or cosmetic surgery outlets. Lisa settled for a trip to a nearby sporting goods store. There she purchased special shoes, bike shorts, and swim goggles.

Nearly every morning for the next nine months, Lisa would wake up before 5:00 a.m. In the glow of a nightlight, through half-opened eyes, I would spy Lisa clutching a gym bag, as she stole away for a pre-dawn swim, or run, or bike-ride, or some combination of all of those things.

On a weekend all of those years ago, I packed the kids into our car and drove forty minutes due north and west to Lake Saint Louis, MO. There my kids held up handmade signs and cheered as their mother successfully swam, biked, and ran toward her goal of finishing an a quarter of an iron-man triathlon under four hours (i.e. a mile of swimming, twenty-five miles of biking, and six miles of running).

As she stood triumphantly smiling and catching her breath at the finish line, she enthused, “You’ve got to do this someday!” I knew in that moment that the endorphins coursing through her athletic brain had impaired her thinking. In the twinkling of an eye, I remembered the single-minded determination it took for my wife to achieve this goal one pre-dawn day-at-a-time for nine months.

For millions of years, men have watched in awe and bewilderment as women have endured every possible kind of physical inconvenience to gestate, and then push a child out into this world. In suggesting that I spend nine months gestating a triathlon of my own, it was as if Lisa was offering me the opportunity to experience labor pains. I imagine that my response was similar to how most other men would respond if given the chance to reverse roles in the childbearing process. I graciously declined while sincerely offering my appreciation for her achievement.

In this Sunday’s Gospel (Luke 14: 25-33), Jesus took the tough tone of an effective physical trainer describing what it would take to cross the finish line. Through the use of metaphors and tough talk, he realistically outlined the costs of discipleship. He was like the Sean Connery character in the movie, The Untouchables, asking Elliot Ness, “What are you prepared to do” [to achieve your goal]?

As I observed Lisa inch her way toward her objective, I saw a familiar pattern that I have observed many times in clients who have successfully instituted life-giving changes. They articulate a clear goal for themselves. Once the goal has been clarified, the necessary behaviors aimed at reaching that goal are lived out one-day-at-a-time with a kind of ritualistic determination that borders on compulsiveness. Unless she had the flu, there were no rationalizations that Lisa would allow to excuse her from her daily training regimen.

Two weeks before I officially asked Lisa to marry me, I accidentally “unofficially” asked her to marry me. As we stood underneath the awning of my landlord’s house, listening to a thunderstorm, I felt compelled to ask, “Lisa, would you be willing to do anything Christ asked of you? Would you be willing to support me in doing anything Christ asked of me?” She paused for a full minute, and then replied, “yes.” Following that “yes,” we sat on the porch all out of words. We listened in awe to the reverberations of what was echoing in our hearts like the peels of a thunderstorm, wondering what would come of the “yes” that we had both just offered to Christ. Since that time, we have both been in training, learning through trial and error, learning from our elders, learning those exercises that we dare not skip…even for one day.

Is there something in your life that is beckoning you? Is there a choice that you could make that would significantly improve your capacity to experience joy? Is it possible that your attraction to this decision may be a calling from God? Would you be willing to map out what a daily regimen of saying, “yes,” to this choice would look like? Are you willing to believe that the one who is calling you, would also give you everything you need to get over the finish line?