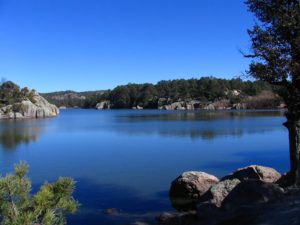 The breeze that blew across the lake that evening was busy lifting and sculpting tiny waves like the small peaks that top a meringue pie. Row, after undulating row, created gentle slapping sounds as they dashed themselves against the mossy concrete puzzle pieces that wrapped the shoreline.

An eleven-year-old boy sat on the shady edge of the shore in one of those rusty old metal chairs that one commonly found in rural backyards of the 50’s, 60’s, and ‘70’s. He rocked to the rhythms of those slapping, meringue-like waves…waves that washed away words, thoughts, and images. An un-bated, empty hook dangled from the cane pole that he had found in the shed. Where he came from, boys didn’t meditate. Boys fished. The length of varnished bamboo that he held in his hands was not so much a fishing pole, as a face-saving alibi for someone who might stumble upon his hiding place and disturb his soul-saving, monastic moment.

The boy had not originally come intending to meditate any more than he had come to fish. He had come to this place with no other plan than to momentarily escape. The chair was placed strategically behind the metal shed with its comforting old smells of fish bate and motor oil. In that position, he could be seen, neither from the house’s picture window, nor from the patio where the latest battle from the ongoing domestic war was being waged.

By eleven years of age, the boy had probably sat still for almost a hundred haircuts. It looked simple enough. Gather up a bunch of hair between your fingers. Snip. Repeat…. “How hard can this be?” the boy reassured himself, as he obeyed the command to take a seat.

“How hard can this be?” was the internal mantra his father repeated as he took up the scissors normally utilized for cutting paper, chicken parts, twine, or anything else that required a rough chop in the kitchen. Emboldened by a Pabst Blue Ribbon beer buzz, and a conviction that his wife was wasting his hard earned money, the boy’s dad resolved to teach her a lesson, and take up a new hobby in the process. “Boy, come here, your old man’s gonna cut your hair.”

The makeshift barber’s chair was precariously perched, like everything else in this family, on the edge of a loyalty conflict between his mom and dad. “Don’t let him cut your hair!” his mother ordered. “It’ll be okay mom” the boy replied.

The view from his family’s redwood deck, that would momentarily serve as a barbershop, stitched together the mowed lawn of their own property with those of their two contiguous neighbors. The visual effect amounted to a several acre paddock for the eyes. A 7:00 p.m. summertime, indigo sky played over the top of imprecise splotches of green created by fragrant stands of locust, maple, and oak trees. Their leaves gently oscillated in the eighty-degree breeze like Miss Illinois’ hands waving from the back of a State Fair parade convertible. Beyond the graceful, genial trees, stretched the lake, which took on the shifting moods of the evening sky.

Tonight, just like other nights, it seemed to the boy that the peace was there…unmistakably there…just beyond his family’s property…out there in the trees, or maybe the lake. It flitted around…like a rare butterfly, just beyond the reach of his arms, or the grasp of his hands.

But back here, in the “not over there,” the haircut was commencing. No barber’s mirror was necessary. After many snips, his mom looked at him as if some hideous species of stinging insect had landed on his head. Once again, she ordered him to step away, while his dad ordered him to sit. Eventually, the haircut gave way to fighting. In the confusion, the boy was able to slip away. He steered a steady path in the direction of the lake. More than a football field, and a large hill away, the waves performed their usual cleansing work…washing away the angry words, the dismayed looks, even the stubborn internal pain.

The Easter Season celebrates the inauguration of a new era in human history. Ever since the resurrection, Christians believe that the human race has been turned into a species of spiritual “Tweeners.” These are the in between times…between the resurrection and the Parousia–when everything will find its completion in God—when “all will be well, and every manner of things will be well” (Julian of Norwich, c. 1415). Until the Parousia, we all share something in common with the eleven-year-old boy by the Lake. We can see the peace of the Kingdom of God just over the horizon, but we live over here in a state of “not-quite-over-there-ness.” Like the boy in the story, our human arms are not long enough to fully reach the fullness of peace, our human hands are not strong enough to fully sculpt it. Moved by the Spirit, we are called to produce the fruits of justice, love, and mercy, understanding that any moment, our achievements can be undermined or cut short by death, the limitations of our own humanity, or the unredeemed, broken humanity of another.

Being a spiritual Tweener is not easy. Like the boy at the lake, where do you go to wash off the smudge and smell when the limitations of this world are too much with you? Do you have a counselor, mentor, wise friend, or coach that you visit from time-to-time? What are the sprititual practices for you that wash away harmful words, thoughts or images? Do you take a summer retreat? Do you soak in the word of God through scripture readings, or sacred spiritual writings? Do you find the living water in the sacred rituals of the sacraments? In your life, where do you consistently find the Living Water?

One Reply to “Living In The In-Between”