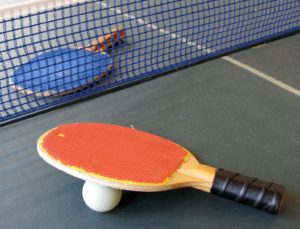 My first thought was, “Here we go again!”  “Another kind and helpful Sport’s Authority salesperson assuring me that this oversized cardboard box is ‘Almost completely assembled already!’”  Last time I heard a pledge like that, the cock crowed three times on Christmas morning before I had the foosball table (i.e. table-top soccer game) assembled.  My long-winter’s nap that year consisted of a two hour siesta before my first grade son, John Harry, shook me awake at 6:30. “Santa’s been here!  Wake up!”

“Fool me once, shame on you!  Fool me twice, shame on me!” I thought to myself.  Before I slid my credit card even one centimeter, I made Jason, the Sport’s Authority Salesman, cross his heart, hope to die, stick a needle in his eye, and pinky swear me that, indeed, our brand new ping-pong table, unlike our six-year-old foosball table, was almost completely pre-assembled within the box.  Jason took the pledge, so I took the plunge.  I slid the card, signed the form, and arranged for a time when I could pick up the behemoth.

The first sign that the Ghost of Christmas Past was destined to revisit me, occurred when my pick-up-truck-driving friend, Mike, and I carried the 150 pound, five foot box down the basement stairs.  As we shifted the cardboard sarcophagus this way and that, a tell-tale jangling could be heard, suggesting that hidden within the vault, were bags of nuts, bolts, screws, and washers.  Immediately, I imagined impenetrable hieroglyphic instructions, tools strewn about the basement floor, and dark, Christmas morning circles under my eyes.  I shook my head the way a child shakes an Etch-a-Sketch to remove an unwanted image from the screen of my imagination.  In place of this Christmas nightmare, I replayed the movie of kindly, honest, jovial…loving Jason, the Sports Authority Salesman.  Surely this Will Farrell-like Elf wouldn’t deceive!

Having returned from Christmas Eve Mass, we tucked our teen-aged, pre-teen, and second grade sugar-plums snug in their beds.  Next, I donned my Christmas Eve apparel (a sweat shirt, jeans, a box cutter, wrench set, screw drivers, and pliers), and descended the basement stairs with Mrs. Claus.  By the time we slid the last thingamabob into the final jangerwank, the clock struck 4:00 am.

I tumbled out of bed at 7:00am to the sound of padding feet.  I imagined that somewhere on this Earth, Jason, the Sports Authority Salesman, tossed for a moment in his sleep, awoken momentarily by the stirring of his conscience.  I then imagined that he rolled over, pulled the covers up over his head, smiled, and drifted off into deep, sound, sleep to be awoken hours later by the smell of his mother’s traditional egg and cheese casserole.  Merry Christmas Jason wherever you are!

Through the course of the next sixteen hours I observed my wife with a sense of awe and wonder as she assembled Christmas toys, cleaned house, welcomed guests, engaged in hospitable conversations with my relatives, and played with our children…all on three hours of sleep…all done with a sense of grace and good cheer.  Inspired by her example, I attempted to emulate her.

This Sunday we celebrated the Feast of the Epiphany.  An “epiphany” can be described as an “in-breaking” of the divine into our human circumstances.  In the Gospel for the day, the Magi traveled a great distance and received the gift of an inner light to recognize divinity in some rather humble, ordinary surroundings (Matthew 2: 1-12).  This Sunday’s feast asked some pretty challenging questions of those who profess Christianity.

Do you have the courage to believe that God is still at work speaking through the circumstances of your own life, trying to reveal signposts pointing the way toward insight and Providence?  The Feast of the Epiphany challenges you and me to look for the in-breaking presence of God—not in the extra-ordinary—but to find the newborn presence of God within the everyday circumstances in which we live.  For those with eyes to see, God’s warm light is constantly flashing through the people and the events of life.

Something so banal as a ping pong table can become an altar on which a parent’s self sacrifice is transubstantiated into a sacramental of God’s love for an excited child at 7:00 am on a Christmas morning.  For those with eyes to see, the desire of a mother to keep the glow of cheerful hospitality alive on three hours sleep manifests the cheerful hospitality of God pulsing through her self-donating love.

Now the kids are older, and Christmas mornings come with a later schedule, but I still see abundant, self-donating love flowing through my house whenever I take the time to notice it.  The Feast of the Epiphany recognizes the quiet heroism and holiness alive in our ordinary daily relationships.  Right here in the middle of the Christmas Season, may you be given eyes to see divinity shining in your holy family and community.