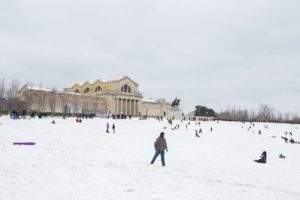 More than ten years ago by now, my daughter and I were practicing proper slope etiquette, waiting our turn as the sledding hill cleared for our next run.  A red-haired, red-cheeked, twelve-year-old boy was positioned to take his turn right before our impending sled ride.  Just as he was ready to make his descent, alien musical tones emanated from the recesses of his winter coat.  Like a Civil War soldier trying to trace the pathway of a stray bullet that hit him, he dug through his clothes.  Eventually he reached into a pocket, and produced a communication device that, when I was his age, would only have been found in an episode of Star Trek.  With a practiced nod of his head, he indicated that he would be sitting this one out.  As we pushed our way past him, my daughter and I could see that he was busy communicating about important matters with the mother ship that had summoned him.

It wasn’t like I had never encountered this kind of thing.  The summer before this incident, after much toil, my son and I reached the summit of a sand dune mountain near the shores of Lake Michigan.  There we discovered that we were actually on a towering peninsula that offered a three-way vista over a striking Caribbean-like, azure expanse of water, sky, and seagulls.  The silence of that windy promontory was broken by a lone wayfarer speaking loudly, as if to himself, “Guess what I’m looking at?”

Further inspection revealed, that like the redheaded boy on the slope, this man was not really alone after all.  At first, our fellow summiteer seemed intent upon delivering a verbal post card meant to make his invisible dialogue partner jealous. Then the conversation turned from a description of the scenery on this side of the conversation to the scenery being experienced on the other side of the conversation.  It included something to do with investments, and something else a business associate had recently experienced.  Through the miracle of satellite technology, one man’s scenery became another man’s office.

I wonder if my reactions to technology are similar to Neanderthal Man as he observed the strange new ways of the more developed Homo Sapiens who seemed to be buying up real estate all around him. He may not have agreed with how things were evolving—but like-it-or-not, with or without him, they were going to evolve.

This Sunday’s Gospel (Luke 3: 10-18) provided a useful illustration of how millennia old spiritual principles could assist an old stone-aged guy like me in discerning a proper approach to the dawning technology-driven evolution that the human race is just now experiencing. In that passage, John the Baptist and his followers were on the threshold of a new stage in human evolution: The Messianic Age.  A variety of people were asking John to get more concrete about what they should “do” to prepare themselves for this new age.

John asked his followers to examine their current decisions through the lens of the ancient values of their Jewish tradition. He advised distributive justice with respect to possessions and food.  He exhorted leaders to be honest and to avoid the abuse of power.  If we apply John the Baptist’s methodology to our dawning age of technology, then we would look to the essentials of our own Christian tradition, and use them as a lens through which to discern our relationship with technology.

People (including church leaders) often collapse our Christian tradition down to our moral theology.  But our faith tradition is so much more than a rule book of proper “do’s,” and “don’ts.”  Our tradition includes a profound spiritual theology with timeless principles relevant in discerning the proper usage of technology.

The first principle and foundation of our spiritual heritage is this.  God desires intimacy with you.  Intimacy requires alone time.  In the midst of a connected world, do you set aside adequate time to listen to the built in technology of the human heart?  Have you learned the characteristic ways that God whispers through your thoughts, feelings, and imagination?  Conversely, do you know the characteristic ways that your ego sets up roadblocks to intimacy?

Another principle:  the living God is present in the here-and-now.  Looking through the lens of a digital camera, for some photographers, causes them to be immersed more fully in the moment.  For others, it pulls them away from the here-and-now as they try to manipulate the scene for some future scrapbook.  The man on my mountain in Michigan may have had a good intention of sharing his moment with a loved one.  He succeeded in transporting himself away from a stunning moment of beauty back into his world of business transactions.