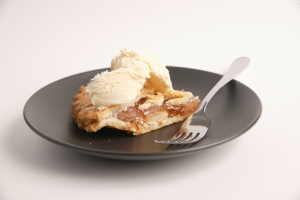 As Midwestern trees shed their colors, against the backdrop of gray, chilled skies, family chefs like me hunker down in their warm kitchens, contemplating the upcoming culinary high holy day.  From a theological perspective, Thanksgiving is nothing more than an appetizer for the main holiday course:  Christmas.  But given the way that Madison Avenue, and the rest of our culture have co-opted the celebration of our Lord’s nativity, I’ll take Thanksgiving for that bone-deep, soul-satisfying sense of home-spun spirituality.  A long meal, shared gratitude, candle light…it seems to me that if it walks like a Eucharist, and talks like a Eucharist…in a certain way, it must be Eucharistic.

In many, many ways, that meal has more in common with liturgy than lunch.  Like any good worship service, there are rituals to be performed, rubrics to be honored, and cannons which must be faithfully observed.  Failure to adhere to any of these sacred rites is sure to result in a free consultation from family members turned liturgical police.

Last Sunday, I asked a group of family and friends to put on their Thanksgiving bibs, to try out some new recipes.  Once again, I learned what any seasoned Thanksgiving chef knows.  Like the hymns of a Mass, so long as you don’t mess with the core structure of things, there is a certain amount of variation that will be tolerated, and perhaps even enjoyed (in small amounts).  But if you mess with the old standards, one of the Thanksgiving police is sure to blow a whistle.

During our tasting event, when I replaced his beloved pumpkin pie with something that was supposed to taste like creme brûlée with pumpkin in it,  my brother Bob threw a yellow flag.  My well educated brother is as up to date and avant garde as they come.  But when it comes to pumpkin pie…give my brother Bob his old time religion.  “I like pumpkin pie the way it is, with no changes,” my brother decreed.  Heads nodded all around with pre-verbal grunts of approval.
“And the Dutch apple pie?”  I asked,  “How did you like that?”
“It was great!  I loved it”  he and the chorus behind him approved.
“Did you taste anything that you didn’t like in that pie?”  I pressed.
His eyebrows immediately raised in suspicion.  “Did you put something different in it?”
“No.  No.  I just wasn’t sure you’d like McIntosh Apples.”
My nine-year-old, who helped me make that pie, surreptitiously winked and smiled at me.

The night before, I shared with her my pie secret.  “Honey, there are people who think they don’t like anchovies, but if you put a small amount of them into their Mayfair Dressing, or in their tomato sauce, they’ll love the unidentifiable depth of flavor.  It’s like that with rhubarb.  There are people who think they hate rhubarb.  But if you mince it up so small that they can’t see it, it will melt into the apple pie.  They’ll love the tart flavor, so long as you balance it with a Dutch apple topping (brown sugar, flour,and butter).  They’ll think it’s the best apple pie they ever ate, and only you and I will know that it wasn’t strictly an apple pie.”  Lizzie swore she would never tell, and she didn’t, not even when we slipped our secret past the most rigorous of the Thanksgiving police.

There were many other cook’s secrets I shared with Lizzie that night.  The most important secret I told her, had to do with the hidden power of a good cook.  “If you put a lot of love and intelligence into your food, the people who sit down to your meal will know that they loved the food.  What they may or may not know was the secret ingredient you put into the meal that made it so much better than just a meal”

The next night, eighteen of us gathered around the table for our usual Sunday night dinner, with the added task of tasting new recipes.  At the last moment, I discovered that I had forgotten the napkins.  That’s when it dawned on me.  “Why not kill two birds with one stone?”  Rather than the traditional meal prayer, I explained that “when the pile of napkins gets to you, before you take one, you must, first, address God by name.”  Then they were invited to share any prayer that came to mind.  Fortunately, Ray was standing right next to me.  As he took a napkin, he prayed a powerful prayer for his mom who died just two months ago.  That set the tone for heartfelt prayer all around.

Thanksgiving cannot be contained into one day, any more than the Eucharist can be contained in Sunday Mass.  God, and the sacred mysteries surrounding the divine, have a way of spilling out of their boundaries, and seeping into life until the property line between heaven and earth grows thin indeed.  A good cook knows that, with the right ingredients, every meal has the potential of transformation into something Eucharistic.  For those with a discerning palate, God is a mischievous chef always cooking up hidden surprises.